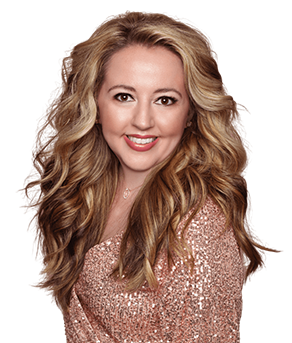 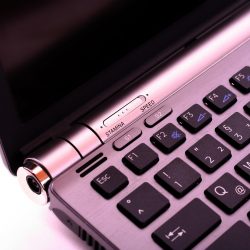 I recently created a video on the pros and cons of boosting on Facebook which you can check out if you scroll down just a little bit.

I got a lot of really great responses from it – especially when I say that the Facebook Ads Manager is exponentially more effective with click-throughs than a post boost. (It’s weird because boosting on Facebook is so in your face and easy to do – and yet, not nearly as effective.)

For years, I encouraged my clients to boost in order to get seen. The engagement can be fun – but what about when you share a link?  If I took a guess, I’d say your click count probably is terrible when you boost.

Aaaaaaaand if you’re sharing a link, it is likely that your goal is to get traffic.

Houston, we have a problem.

HERE’S MY TRUE-LIFE EXPERIENCE WITH BOOSTING:

Of course, I do this in order to draw more eyes and more listeners. For months, I would post the link and then boost my post to get more eyes on it.

I would spend around $20 to boost the episode EVERY WEEK. Despite the investment, I would get VERY few clicks to my website.

REASONS YOU MIGHT GUESS I GOT SO FEW CLICKS:

I was actually remembering to not make the common mistakes described below – I’m just writing them out to show you what they are. What’s remarkable is that correcting these mistakes is still less effective than using the Facebook Ads Manager.

A – Not clicking to optimize for clicks instead of engagement.

B – Not selecting a target audience to promote your share to.

C – Not using a call to action button.

D – Having boring or uninteresting content with dull, non-compelling copy, or a boring, uninformative image.

E – Using a link share image that has more than 20% of text.

WHAT I KNEW WAS TRUE ABOUT MY BOOST ATTEMPTS:

A – I was totally already optimizing for clicks.

B – I was being selective about my target audience.

C – I was using a cool call to action “Learn More” button!

D – My copy was boss. I’m also a copywriter. So this part was fine! Plus, people LOVE the podcast. I hear that all the time!

E – My images were fun and followed the < 20% text rule so they weren’t getting dinged with ad dollars.

I KNOW WHAT YOU’RE THINKING…

This is a classic case of “Not my fault, the Internet hates me!” Well, friend, I know the Internet does not hate me. I just knew I could do better!

And that means creating a real ad using the actual Facebook Ads Manager. Plain and simple. 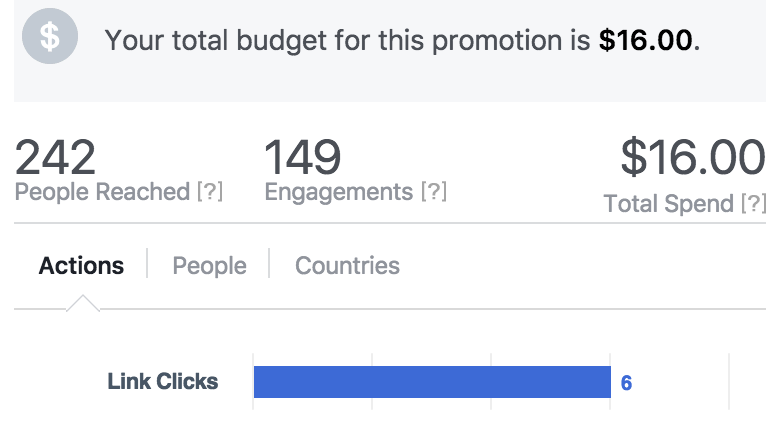 Yes, 6 clicks for $16. Far from bargain bin clicks – this was $4 PER CLICK. It’s more like if clicks were sold at Nordstrom.

These results are actually from an AMAZING episode too! One of my favorites. I won’t disclose *which* episode it was because I love the person too much. But, it’s such a shame this side of my marketing, despite my best effort at the time, was so ineffective. THANKS FOR NOTHING, YOU DUMB BOOST!

SAMPLE RESULTS FROM USING THE FACEBOOK ADS MANAGER TO PROMOTE A DIFFERENT, BUT ALSO AWESOME LIZ ON BIZ EPISODE – AND HOW I SAVED 80% PER CLICK.

The greatest feature in the Ads Manager is Split Testing.

Split Testing is a marketing term used to describe testing two strategies simultaneously and changing one variable to see which strategy is more high-performing and effective.

I did this first to test out which target audience would be the most responsive to my ads. I labeled each ad (the ones running against each other in this split test) in a way where I could discern who each audience was. I did this based on date – one being a target audience I believe was my audience in 2017 – and one from my old target audience (2015.)

I realize now that naming in such an abstract way is not incredibly helpful (LOL) – so I highly recommend naming your ads as obvious as possible so your data doesn’t lose its meaning over time.

In the example below, the new target market (Liz Theresa 06-27-17) was the higher quality of the two because it boasted the lowest cost per result ($1.37.)

As I ran this split test, I also wrote everything down on a piece of paper so I didn’t lose touch with the meaning of each ad. (You don’t want to get lost in your own split test, so I recommend doing this the first time around.)

NOTE: If you’re a FB ads genius, you’ll think this cost per click is nothing to brag about. But this post is about understanding the Facebook Ads Manager as a platform – and seeing its success over boosting. It is not about having the lowest cost per click on the first try. LOL. So, before you judge me, let’s all be excited I’ve figured this part of things out by myself.

After I figured out who my audience was in Split Test #1, I decided to also test out ad placement which was Split Test #2.

This time, I tampered with doing Facebook-only ads versus “Automatically-placed” ads.

According to the set below, ads placed automatically had the lowest cost per click (see cost per result) – it was only $0.53 per click!

WHAT I’VE LEARNED (+ HOW MY APPROACH IS GOING TO CHANGE!)

Based on the data above, I now know my target audience is the one I labeled with the date 6-27 -17 and that automatic placement is better than selecting Facebook exclusively.

A few things to note about what I’ve also learned about automatic placement. (These will make you think!)

I wanted to make sure you saw I have a free copywriting training video that you can get when you fill out the form below. It's delivered immediately and I don't want you to leave without it!